Run — do not walk — to the new Angelika Mosaic in Falls Church/Merrifield, Virginia! I could not be more excited that this outstanding film center has come to my neighborhood.

On Friday, DP Dave Goulding (“Bedford: The Town They Left Behind,” “Follow Me: The Yoni Netanyahu Story” and many of the 2012 Barack Obama campaign spots) joined me for the opening night screening of the dazzling documentary “Samsara” — which the Angelika screened in 4K. The film was followed by a Skype Q&A with producer Mark Magidson. Great!

Today, I went back to see “Grand Illusion” in a newly restored print. Afterward, artist/illustrator Paul Davis signed copies of the poster he created for this release. All you theatre folks know his distinctive style from classic art he created for Joseph Papp’s New York Shakespeare Festival.

The Angelika makes the movie-going experience spectacular in so many ways. Treat yourself! 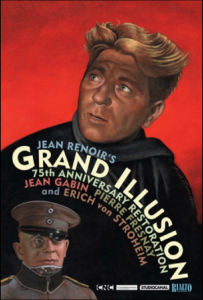