Be kind. Be strong. Choose joy.

This is the mantra I found on my latest trip to Africa, and I take strength and happiness from it every day…

My friends Rob Miller and Andy Wakeford — brilliant photographers — invited me to join them on an unusual excursion to South Africa (where I’d been twice before) and Botswana (where I’d never been). A non-profit organization called FAWN (Fighting AIDS With Nutrition) has been supplying liquid nutritional products like Ensure to two poor African communities for several years. Rob and Andy and I, along with a very talented musician named Darden Smith, accompanied the organizers to photograph people with HIV and to make audio recordings of interviews with them. The idea is to eventually produce a book of the resulting word-and-image portraits.

Our first days were spent in a township near Johannesburg, SA. The population of the community is around 350,000. That’s not a typo. And, while the exact HIV-infected numbers are not known, I can tell you that the number is very high based on the fact that, as we walked from home to home making our visits, the next infected family was always just a few houses away.

In Botswana we were in a small village called Sefare (se-FAR-ay), where our hostess was an elderly woman who gave her house over to us visitors. Imagine: she moved out and simply gave us her home! It was one of the finest in the community with indoor plumbing and electricity (although the electricity would sometimes fail for no apparent reason and then come back on hours later.)

Darden was there to do something he has done elsewhere with veterans and other people with stories to tell and life experiences to share. Armed with only a remarkable talent and his guitar, he has a gift for spending time with someone and creating songs on the spot using what he learns from them. In many cases, the storyteller actually writes the song with Darden and might even sing it with him as it takes shape.

Darden became a recognizable figure very quickly around town: the white guy with the guitar. And as evening darkness came to the village, he would sit on the front porch of our guest house, strumming and singing… and attracting visitors.

I was particularly affected by the children who would come by. Some spoke or understood a little English, but in the spell cast by Darden and the spirit of the occasion language wasn’t really necessary. 8-year-olds Maria and Angel, and Angel’s 6-year-old brother Innocence were among the youngsters who began dancing. Darden stepped up the tempo, and for hours there was happiness in the dirt yard under the light of a million stars and an African moon. Darden’s refrain “It’s a beautiful night in Sefare!” cold be heard long into the night, over and over, becoming a musical theme that echoed in our dreams. 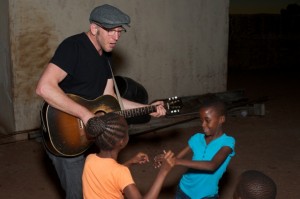 But make no mistaked: neither Darden nor the rest of us brought the happiness to Sefare. Those evenings put the innate cheerfulness of the villagers on display for us visitors. But, helped by that exposure, we began to see it as basic to their nature. In the workers at the clinic, many of whom have HIV themselves, we saw truly beaming smiles where sadness could have easily prevailed. I sat in a grassless yard with a toddler – one of eight children of a mother with the virus – with barely anything to wear and only a bent spoon as a toy — he and his siblings jumped about and laughed with no idea that life was anything but a celebration. And the infected people we interviewed, when they spoke of the disease that is so dreaded around the world, continued to see life as a gift to be lived joyfully.

On our last morning in Sefare, Darden walked the streets as the locals were beginning the new day, stepping out of the doorways of their shacks whose shabbiness would evoke instant pity from most Westerners. He told me later about what he saw… the elderly white nun, already up and about for hours on her daily visits to the sick… 6-year-old Innocence trundling off to school… and a man he had never met who waved to him and sang “It’s a beautiful night in Sefare!”

I know I’ll never forget the people of Sefare… they are kind, they are strong, and they choose joy. 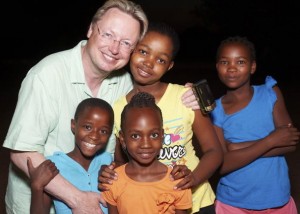