I remember a comment by one of the students in the Paper Clip Project to principal Linda Hooper. The year was 2003, and we were staring into the gaping hole that used to be the World Trade Center…

“This is why you do it,” he observed. 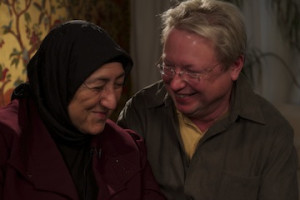 Last year I was privileged to meet this strong and committed woman while working on a film with David Hanrahan and my colleagues at Future View (see David‘s beautiful, poetic portrait of Sakena here). That project led to the opportunity I had last winter to ask Sakena about the pending U.S. withdrawal from Afghanistan.

Keep in mind that Sakena has spent decades meticulously building hundreds of clinics and learning centers for Afghan women and children, all while under an ever-present threat to her own life. Her work has had a positive impact on the lives of over 8 million Afghans. Think about it: 8 million people are healthier, better educated, and more ready to succeed at creating the kind of Afghanistan most Afghans — and most responsible Americans — hope for. And there are many, many more she intends to help.

So, as we rode through Washington, DC together in the back seat of the car, I asked her:

“Sakena, how do you feel about U.S. troops leaving your country?”

She turned away and looked out the rain-covered window as the gray Capitol building passed by. “Joe, I am afraid. I am very afraid,” she said.

I was not expecting that from a woman who deals with pain and suffering every day and, at any given moment in her homeland, is but one bullet from an angry militant away from death.

“Understand, Joe, we do not want your soldiers in Afghanistan forever. But if we will survive, we need security. And we do not have security from our own people. If I walk up to someone today who is supposed to provide security in Afghanistan and show him my ID, he cannot even read that ID. He is not trained to do his job. He cannot protect my people.”

She turned back to me with dark, penetrating eyes. “And you know that the first ones to suffer will be the women… and the children. And they will suffer quickly and it will be very bad.”

I oppose war and killing. I want our troops, valiant and so often under-appreciated, to be back with their families. I celebrated the announcement that we’d be bringing most of them home by the end of next year. And now we hear that maybe the president will bring them all home next year.

And yet, I could see in Sakena’s eyes the reflections of millions of women and children… and it made me think.

2 thoughts on “Leaving Afghanistan: More Complex Than We Wish”