Last fall I posted enthusiastically about the opening of the Angelika Film Center in the new Mosaic District (in nearby Merrifield, Virginia). I’m happy to report that the theatre has proven a great hit here!

I’ve become a regular attendee, and Danielle Mouledoux, the Promotion and Events Manager has kindly invited me to moderate a number of post-film discussions. These Q&A sessions following the screening of a film are one of the great features at the Angelika, adding another dimension to the movie-going experience. A few recollections…

Frances Ha — This indie film was a revelation to me. Director Noah Baumbach (The Squid and the Whale) has won critical acclaim for this black-and-white portrait of a young woman finding her way in life. It captures the feeling of loneliness many of us have felt while hammering out how we will live our own lives in our own ways. Afterwards, the discussion I led with star and co-writer Greta Gerwig was presented via Skype on the big theatre screen. Ms Gerwig’s charm quickly dismissed any concern that distance and technology would get in the way of an exhilarating exchange between the actress and the audience.

Molly’s Theory of Relativity — Jeff Lipsky is both a film distributor (Adopt Films) and filmmaker (Flannel Pajamas) who identifies Woody Allen and John Cassavetes among his influences, both of which one can recognize in this idiosyncratic look at a young couple making a decision about their future. Mr Lipsky generously came in person to speak with audiences for two day’s worth of screenings.

20 Feet From Stardom — My most recent moderating experience was a wonderful treat, and I highly recommend this documentary about women whose names you may not know, but whose voices you’ve definitely heard many times. They are the backup singers, from what I’ll call the ‘golden age’ of the sixties onward. 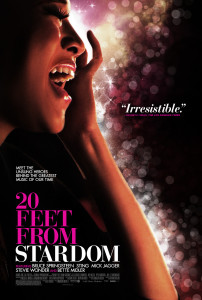 Darlene Love (“Christmas, Baby Please Come Home”), Mary Clayton (long time singer with the Rolling Stones), Judith Hill (Michael Jackson’s tragic “This Is It!” tour), and others. Danielle learned last minute that Claudia Lennear was in DC for the weekend and cleverly arranged for her to attend a screening for which I was fortunate to lead the post-film Q&A. Claudia is reputed to be the inspiration behind the Stones’ “Brown Sugar” and David Bowie’s “Lady Grinning Soul”. Down-to-earth and full of delightful anecdotes (“Mick Jagger and I used to dress up in each other’s clothes!”), she was such a hit that, as the start time for the next film approached, we led the audience out of the theatre, up the stairs and continued the chat in the Angelika’s cocktail lounge.