When Bill Parks of Dominion Post asked me to write three videos for his alma mater, Washington and Lee University, I had no idea how really swell the experience would become…

One of the videos is an extended history of an unusual W&L tradition that’s over a century old: the Mock Convention. Every presidential election year, students mount a simulation of what the two political parties will do later that year — they put on a nominating convention. The Mock Con, as it is known around campus, attempts to predict who will be the nominee of the party that is not then occupying the White House. And they’re pretty good at it too, boasting a 76% accuracy record since the event began in 1908. 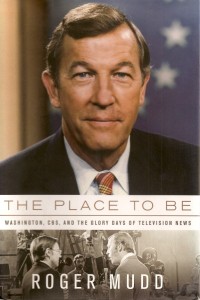 What was already a fascinating project took on a whole new dimension when W&L alum Roger Mudd agreed to narrate and be interviewed. Now, anyone who knows me is aware that I’m a political junkie as well as a fan of the golden era of broadcast journalism, of which Roger Mudd was – sorry, make that “one of the exemplars of what a newsman ought to be.” You see, Roger would never consider himself a “star.” That would be wrong. A newsman’s job is to report the news as accurately as he can and without undue reference to himself (I’m looking at you, Scott Pelley). So stardom doesn’t have standing among proper journalists.

This past Thursday, Bill and I recorded Roger’s voice over for the video (I interviewed him some months ago). I could go on at great length about the many pleasures of my visits with Roger — from his Southern hospitality (chardonnay has been served on more than one occasion) to his fascinating stories of television news when the medium was still young and could be proud of its standards of accuracy and ethics.

I’ve learned about things as only Roger could tell them… the day President Kennedy was assassinated (Roger was in the Senate dining room when it happened, but he regaled me with little-heard tales of his colleagues who were in Dallas); the March on Washington (Roger was atop the steps of the Lincoln Memorial, reporting for CBS); Robert Kennedy’s assassination (Ethel Kennedy has publicly credited Roger with getting her through the chaotic scene in the pantry of the Ambassador Hotel to her husband so that they could say goodbye to one another) — and I’m just getting started.

Ever heard about the days in Washington when motorcycling couriers raced from Capitol Hill to the only place in town that could develop the day’s film? It happened every evening between five and six o’clock, and whoever was fastest ensured that their network would get on the air first with whatever big story had broken that afternoon.

They’re great stories, and Roger can sure tell ’em. I hope to hear more, maybe over a glass of Maker’s Mark — the bourbon that turns out to be our mutual favorite. You, dear reader, can enjoy them too! Just go online and get yourself a copy of Roger’s 2008 memoir: The Place To Be – Washington, CBS, and the Glory Days of Television News.