I’m working with Cheryl Rattner Price, a ceramic artist based in San Diego, who launched a project at the San Diego Jewish Day School with her friend and colleague Jan Landau. The Butterfly Project grew out of Jan’s desire to find a new way to teach about the Holocaust — one that would be instructive but not overly alarming to children. She had the idea of making 1.5 million butterflies in memory of the 1.5 million Jewish children murdered in the Holocaust. When Jan reached out to Cheryl, they decided that the butterflies should be made of clay and that painting them would be an activity that could be a gateway into the subject for youngsters.

Although she wasn’t a filmmaker, Cheryl saw the value in documenting the project, and she had been filming various events and activities for several years when I heard about what she was doing. It turns out that Paper Clips had been a prime motivator to both Jan and Cheryl. Now Cheryl was looking at how she could take all the footage she’s accumulated and tell The Butterfly project’s story. She asked me if I ever help first-time filmmakers make their movies, and I told her that I do. So I joined the project as a consultant. 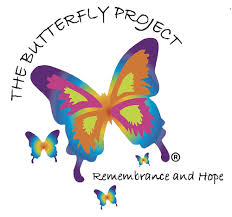 I can’t speak highly enough about Cheryl as an open and willing collaborator. Making any film is challenging; making one’s first film is even more so as it stretches one’s ability to learn while doing. I think Cheryl and I have just the right chemistry for traveling together on this journey that so far has led us from evaluating the archive of footage she had accumulated to now seeing a real possibility of a documentary that might become more than the documentation of an outstanding educational effort.

A series of interviews I conducted with Cheryl in San Diego last summer added to the substance of the film. In addition to Cheryl and Jan, I interviewed Susan Goldman Rubin and Ela Weissberger. Susan is an author who has written about Ela and her imprisonment at the Terezin concentration camp. Terezin is probably best known as the place where young Pavel Friedman wrote his iconic poem The Butterfly before being sent off to Auschwitz, where he was killed.

This film has become a real joy and a wonderful learning experience for me. I’m very excited about what’s coming next!