Kay and I just returned from our third Turner Classic Movies Cruise. If you love old movies like we do — and especially if you also enjoy cruises — then you should consider taking the next one. We’ll be there!

TCM has partnered with the Disney Cruise Line to create an experience for movie-lovers that’s hard to beat. On this most recent cruise, we enjoyed five days of classic films, shown in a four different venues — from the large (yet comfy) Walt Disney Theatre to the giant poolside screen. There were about 30 films of various genres — Anna Christie, 42nd Street, Rio Bravo, An Officer And A Gentleman, Red-Headed Woman, Witness For The Prosecution. Actors 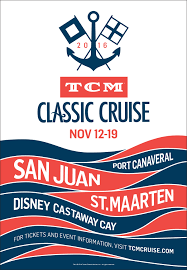 My favorite feature by far was were the discussions with iconic producer/writer/director Roger Corman, He must be one of the most beguiling characters in
moviedom, a man who took unconventional approaches to making films and launched the careers of Jack Nicholson, Francis Ford Coppola, Ron Howard, Martin Scorcese and others. He also introduced and discussed two of his films: The Raven and my personal fave, X The Man With X-Ray Eyes.

On previous cruises, we enjoyed guest appearances by Debbie Reynolds, Mickey Rooney, the astounding Norman Lloyd (look him up!), Robert Wagner, Arlene Dahl and more. Next year, TCM is extending the cruise to seven days and moving to a bigger ship, the Disney Fantasy.