Last February, I wrote about consulting on a documentary called NOT The Last Butterfly and mentioned interviewing Ela Weissberger, a Holocaust survivor who had been imprisoned at the Terezin concentration camp, located in what is now the Czech Republic. Ela’s story proved to be so compelling and so perfectly related to the themes of the film, that Cheryl Rattner Price (the superhuman force behind the film and the project on which it is based) took a great leap of faith, deciding that we would take Ela back to the camp and film her there. As if that wasn’t wonderful enough, Cheryl asked me to direct the shoot.

We stayed in Prague during the shoot, since Terezin is about an hour’s drive away. Our crew was all Czech, organized for us by DP Michal Krecji. We scouted the camp one day and shot there for two days, with additional filming in Prague.

Before I go on, let me say that I loved being in Prague. It’s a classic European city, perfect for walking. Our 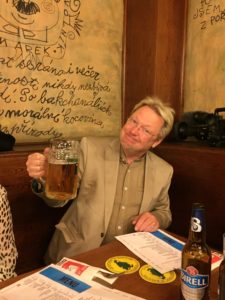 first day there was a free day, so I went off by myself exploring, visiting Wenceslas Square (with a hat tip to my late friend Larry Shue, whose play Wenceslas Square is a must-see), having lunch in an outdoor café, and admiring the architecture and vast public spaces. There were other walking opportunities, as well as a
chance to tour the magnificent Prague castle. One evening, Ela took us all to her favorite nightspot, U Kalicha. When it came to food and drink, I played it safe — onion soup and some vegetables, having read the menu and been put on guard by the very perplexing item called “Baked Knee”. Happily, the Czech Republic is home to one of my favorite beers, Pilsner Urquell — I drank it wherever we went! The entertainment was a somewhat tipsy accordion player — when he played, Ela and I danced the polka.

Filming with Ela was an even greater experience than I anticipated. Perhaps our primary location in Terezin was the building where Ela lived while there, room number 28 in building L410, whose appearance today belies the fear and misery it held during the reign of the Third Reich.Yet as Ela spoke about her experiences, I could feel the pain and suffering she and so many others lived through. Of 15,000 children who passed through Terezin, only 100 survived. Ela pointed out each place, each item that triggered memories. She showed us the door to the room where her mentor, the artist Friedl Dicker-Brandeis, lived with her husband. Friedl taught Ela and other children to express themselves with drawings and paintings, helping them hold onto their sanity and emotional identities through an early form of art therapy. It was a remarkable experience for me to visit this place with this woman who went on to create a full life after she was liberated.