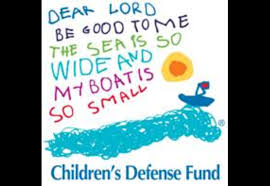 I first became aware of the Children’s Defense Fund in the early 1990s when I had an office in the building next door. Learning about this organization that stands as a strong voice for equality and opportunity for ALL children pushed all the right buttons for me. At that time, I was only a few years into what would be over a decade and a half of working with the Elizabeth Glaser Pediatric AIDS Foundation, an organization working on behalf of a specific cohort of children desperately in need of advocates. Working on behalf of children has always appealed to me. I didn’t know how or when it might occur, but I hoped that someday I might have the chance to interact directly with CDF and its powerful founder and leader, Marian Wright Edelman. But time passed and life kept happening without that wish coming true.

Imagine, then, my delight when — out of the blue in June 2015 (over twenty years later!) — I received an email saying that Ms. Edelman would like to schedule a phone call with me. We had a wonderful conversation. It turned out that Ms. Edelman had seen PAPER CLIPS. She was sharing it with her staff and wondered if I would come in to speak with them about the film and the story that inspired it. Would I? You bet I would!

When we met, the staff members were full of questions and thoughts, but I feel as though the day meant more to me than it could have meant to them. I was in the presence of a team of deeply committed people, some of whom had been working for the well-being of children for decades.

After the discussion ended, a woman approached me for a one-on-one chat. Her focus was on finding ways to end gun violence, and I learned that her motivation came from disturbing personal experiences. As she related what she herself had survived (a private story that I don’t feel I should repeat here), I saw up close how our country’s inaction to protect its people from a danger — one that can be reduced within the bounds of our Constitution — had bent and bruised her. And I also felt the steely resolve that had grown in her and gave her strength to speak so passionately to someone she’d just met.

Subsequently, Ms. Edelman and I spoke at length in her office. For more than 40 years, she has led this organization that was born out of the civil rights movement. In CDF’s own words, “through careful research, public education, policy development, implementation and monitoring, and grassroots organizing [CDF has] tried to help build a national house, where every child is healthy, safe and educated, room by room.” The list of its accomplishments and the legislation it has helped to enact shows that mission’s far-reaching impact. I could see in my time with CDF’s founder what real leadership looks like, and I could see what has attracted and supported her dedicated work force.

I encourage everyone to learn more about CDF and to find ways to support it.