I recently had the great pleasure of leading two discussions with “the dazzling Sonia Braga” at screenings of her latest film, AQUARIUS.

Ms Braga, who began acting on the stage in her native Brazil as a teenager, became internationally known with Kiss of the Spider Woman (1985) and went on to star in The Milagro Beanfield War, Moon Over Parador, The Rookie, and many other films. More recently, she’s made many TV appearances on shows like Sex and the City, American Family, Alias, Royal Pains, and now Marvel’s Luke Cage on Netflix where she plays Rosario Dawson’s mother.

In director Kleber Mendonça Filho’s leisurely-paced AQUARIUS, Ms. Braga plays 65-year-old Clara, a former journalist and music critic who has lived since her youth in a beachside condo — a very inviting and well-lived-in condo that is itself a character in the film. Developers have persuaded all the other tenants to vacate the building, but Clara is determined to stay. That premise provides Mendonça with the framework within which Ms Braga delivers an Oscar-calibre performance, never giving in to the predictable story and character clichés that lesser artists might have leaned upon. For some — especially those who have become accustomed to the rapid rhythms of most films today — this director’s unhasty revelation of Clara’s life and persona may start to lag, but with Ms Braga at the center there is always a new fascination coming. I should credit also the quietly ambitious cinematography by Pedro Sotero and Fabricio Tadeu which brings out the homey feeling of Clara’s apartment and, by flowing effortlessly between exteriors and interiors, helps generate that sense of what it’s like to live in an apartment but feel the activity outside its walls.

I recommend the film highly, both for Mendonça’s skill and (most especially) for Ms Braga’s captivating presence.

Before meeting Ms Braga, I had been told that she is one of those celebrities who is easy and fun to be with, and that was my experience over the joyous evening I spent with her. First there was a short get-to-know-you chat in the offices of the Angelika Film Center near my home in Northern Virginia with her delightful publicist Lisa Anaya and the film center’s special events director Elyse Roland. In ten minutes we became comfortable pals and moved to first-name status. 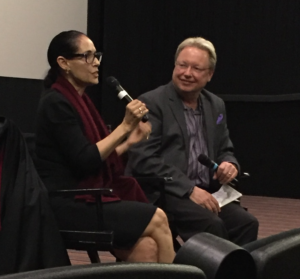 Then we headed into the theatre for a pre-screening chat with each other and the audience about Sonia’s career and the film that was about to be shown. When I introduced her to the audience, I referred to her as “the dazzling Sonia Braga” — and she is indeed dazzling (and she liked my choice of adjective). Among the many interesting things we covered was the deftness with which Mendonça handles memory and flashbacks in AQUARIUS, modifying traditional methods into his own style. Sonia also detailed the camera choreography and audio techniques used in a single continuous shot that begins on a group of people talking outside and below Clara’s apartment window. The camera pulls inside the condo, moving over Clara resting in her hammock and across the room to her front door in time for the people who had been outside to knock on the door. As the shot progresses, the sounds of the conversation outside become the muffled voices and footsteps in a lower lobby and then climbing the stairs, ending with the voices as heard from just the other side of the front door of the apartment. The cinematography and sound design — all coordinated live in the moment and in a single shot — are very impressive. 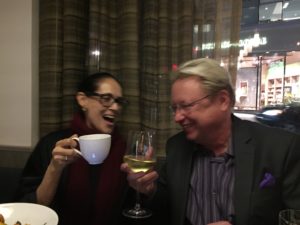 Next wonderful Elyse had arranged for us all to have dinner — a splendid and now-and-then raucous meal at Requin, a French Mediterranean restaurant near the theatre. Then we were off to the Angelika’s Pop Up Theatre in DC where a screening was ending for another interview/discussion. The evening ended with Sonia meeting audience members in the theatre’s lounge, taking photo after photo with fans.

Although it is not a political film, certain political issues have swirled around AQUARIUS since its premiere at Cannes in May. As I understand it, Mendonça’s public protest at the premiere against the suspension of Brazilian President Dilma Rousseff, in which he was joined by Sonia and the film’s cast and crew, drew harsh criticism from a film reporter, Marcos Petrucelli. Subsequently, Petrucelli was appointed to the committee that selects the film for Brazil to submit for Oscar consideration. This was seen by many as pushback against Mendonça, foreshadowing the failure to choose his film. Several other filmmakers withdrew their own films from consideration in protest. (Indeed, an inferior film called “Little Secrets” will be Brazil’s entry.) The night before the Angelika’s screenings, the AFI Silver screening was mobbed with political demonstrators, according to what Lisa Anaya told me. (No such drama occurred at the screenings in which I participated.)

AQUARIUS began a limited theatrical release in late October 2016. Watch for it to be available through various cable and digital media outlets soon.