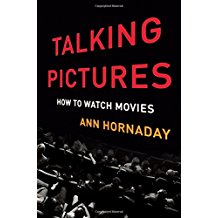 Ann Hornaday, chief film critic for The Washington Post, can help with that! Her new book — Talking Pictures: How To Watch Movies — delves deeply into how one can cultivate the art of movie-watching. From the screenplay to the finished product, she draws on a quarter-century of her own film analyses as well as insights gained from interviewing the likes of director Tom McCarthy about medium shots vs closeups in Spotlight, actor Robert De Niro on why he doesn’t explain how he does what he does, and production designer Jeannine Oppewall revealing why she put so much detailed work into a background seen only briefly in Catch Me If You Can.

I had the pleasure of chatting with Ann Hornaday following “Look To The Right,” a discussion she had with self-described “conservative” filmmaker Michael Pack at the 2017 AFIDocs. Besides a fondness for catching sound editors sneaking the “Wilhelm Scream” (look it up!) into movies, I found that we have similar tastes in documentaries when we compared notes on The Work and Nobody Speak (both shown at this year’s festival). You can read Ann’s pre-discussion thoughts on liberal vs conservative ideologies in docs, her review of Nobody Speak, and more about the  The Work — selected as winner of the SXSW Documentary Grand Jury Award by Ann and her peers.