For more than a decade, Joe Fab has appeared at screenings of Paper Clips and other films, as well as serving as a popular keynote speaker, workshop and seminar leader, motivational speaker, and documentary film lecturer. Below you will find examples of the kinds of groups who have welcomed him, subject areas he has addressed, and endorsements from clients.

Every speaking event is custom-designed in collaboration with the client in order to both meet the specific interests and concerns of the audience and maximize the use of Joe’s presence at the hosting organization. The philosophy is this: if you’re bringing him in, put him to work and “use him up!” For example, if he’s coming to show Paper Clips and speak to your middle school students, let’s create a sidebar event with teachers on creating a class project that gives students the experience of changing the world around them. 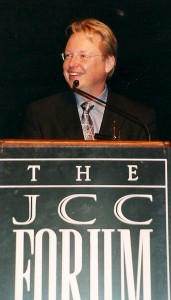 Joe Fab has spoken before scores of audiences, representing a great variety of groups, ranging in size from twenty to hundreds, all over the U.S. and around the world:

A few kind words from educators…

Wow! Thank you so much for the eloquent speech and moving presentation… Paper Clips touched the hearts of our middle grades educators because it showed to all what can happen when middle grades students are actively engaged in crucial issues and human caring… Tapping into the spirit and potential of young adolescent learners is an important part of our message. Paper Clips can be a valuable tool in spreading this message. — Deborah Kasak, Ed. D., Executive Director, The National Forum to Accelerate Middle-Grades Reform

We carried his thoughts throughout the rest of the year… I believe our school climate changed this year as a direct result… our suspension rate has dramatically declined this year and our students are demonstrating more tolerance towards others as indicated by a decrease in bullying… I highly recommend this presentation for any middle or high school program. — Elizabeth Gillingham, Principal, De Portola Middle School

…my highest recommendation…  He knew just what to ask to get them to open up and be themselves…  I literally had tears in my eyes watching my students interact so closely with a man they had met for the first time just a few minutes ago. —  Betsy Sawyer, Groton-Dunstable Regional Middle School

Your presence on campus yesterday was truly special… thank you for helping us see the world through a more enlightened, thoughtful and open lens… [and] for helping us focus and imagine. —  Tom Doar, North Shore Country Day School

Your film and your talk are still talked about in Richmond on a continual basis. We loved having you! — Darcy Adler, Weinstein JCC

Representative examples from the scores of organizations for which Joe has spoken:

As well as appearances at: